After our previous concept ideas weren’t quite working, Fiona and I went off and tried some new approaches. After looking at set design and various other virtual reality experiences, it allowed me to think more about a 360 experience – where the participant would be and how we could create visuals for that.

As a team we made the decision to create the work upon a dark background. This decision was based upon a few elements. Firstly black gives the feeling of perspective and depth, which makes a lot of sense for Virtual Reality. In addition, when designing for a gallery of art or photography, black or gray backgrounds help to make the other colors stand out, contrasting well with bright colors. With Colin’s think oil paints in mind, this seemed to make sense.

Colour psychology suggests that black is associated with mystery, an idea that ties in well with our concept targeted at graduating students. The transition from university and into the “real world” is full of mystery, with the many of people leaving with uncertain next steps. In a sense, we’re inviting participants to step out from their own unknowns and into another to hear Colin’s story.

I started my new concepts with this in mind and began by doing a few more drawings to get some ideas out of my head. These were done with possible themes in mind such as self doubt, conversations on his work and growing up as an artist.

Participant as a light

I had watched a fantastic interview by Colin Davidson where he was asked about self doubt in his work – if he ever questioned himself or felt that he was the right path. He responded by firstly saying yes, but then continued to speak about the world of art. He spoke about how art was full of questions, and as a viewer, you never want all of the information – you want to be able to interpret what you see. Similarly in his life, he has grown to realise that he never has all the answers and as he’s grown as an artist, he’s become comfortable with that. In response to this idea, I thought it may be an interesting idea to make the participant a light source and as they move their head in the Oculus, the lights could shine around the space potentially revealing objects in the scene. 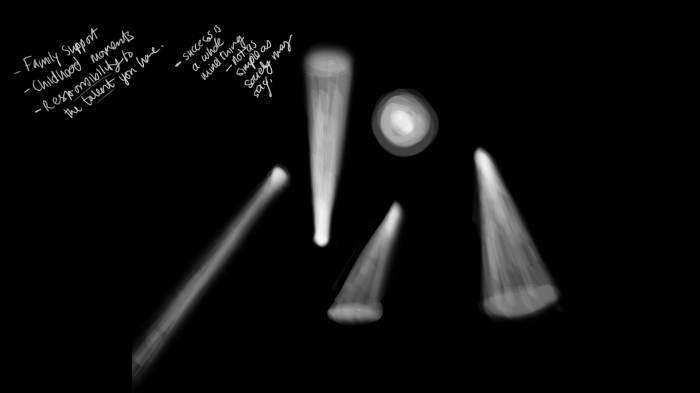 With painting at the core of this project, it would be lovely to incorporate it into the setting. I love the idea of having brush strokes animating through a 3D space, that the viewer gets surrounded by. The Nike – Paint With Your Feet project has some beautiful visuals of how these strokes could be made digital, and I’d love to incorporate this into our piece.

Nike – Paint with your feet 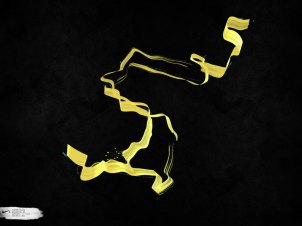 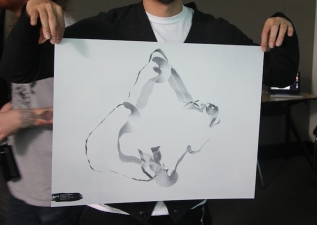 Another theme that I thought may appear in our interview is how Colin’s upbringing influenced him. Colin’s father, Rowland Davidson is a successful Irish artist so it’s very likely that he was always exposed to art as he grew up. I began to imagine how this development progressed, potentially through layering paints to create final images. 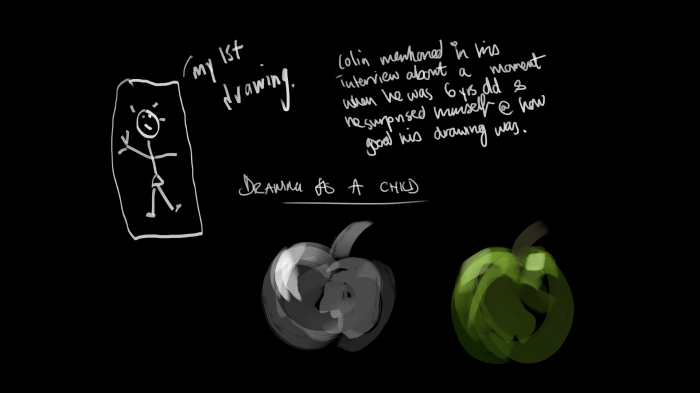 These concepts are all based on themes I expect to appear in the interview, and they can all be adapted to the themes we hear. Their main purpose was to think about how to illustrate ideas spoken about in the interview while Colin is talking.

Imagining the setup of the experience

We decided to start to think about the space in 3D, focusing on how the scenes are set up. We moved to Maya, exploring how light and space could create depth in the environment. Fiona began to focus on the interview scene and how that may look, and I focused on the introduction and the explorable space. As I mentioned previously, the experience is broken into three sections – an introduction, an interview and an explorable space. 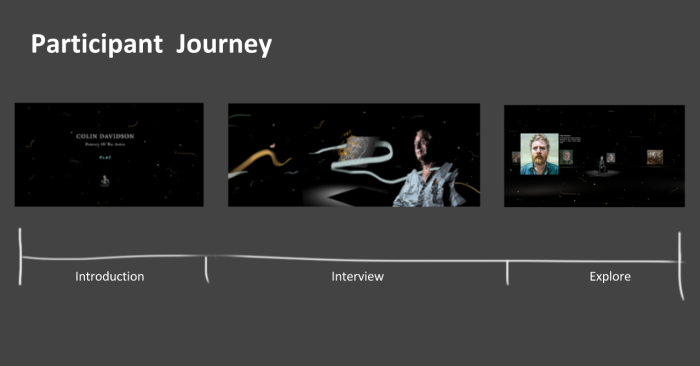 We decided that it would be important to include an introduction for a number of reasons. Firstly, it helps the participant have an idea of what’s to come and expose them to the world they’ve been placed within. Secondly, from our research with into virtual reality experiences , we’ve learned that it’s important to create a 30second “settling in” period, where the user can adjust to the environment.

With this in mind, we thought an open space with a particle filled environment, and a short text intro may be a good way to ease the participant into the experience. As well as the text and particles, there will be a image from the DepthKit in the distance to introduce the participant to the interview. When the participant presses PLAY, they will zoom into this image to begin the interview section. We wanted to keep these elements the only parts of the introduction, to remove distractions and whet the participant’s appetite to see more.

While this is an original piece, the content is driven by Colin Davidson’s story and I think it’s important to “brand” it in lieu of how he presents his work currently. In a way, this piece will be a gallery of his work with an insight into his process, so it is important to respect his work as you would in an exhibition. With this in mind, I took a look into the typography and set ups of his recent galleries, to see how it could influence our piece. 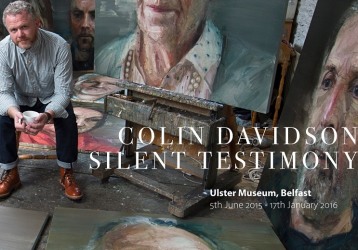 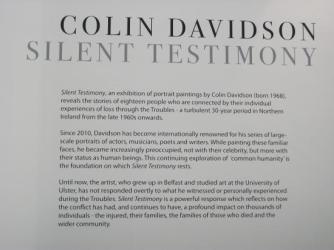 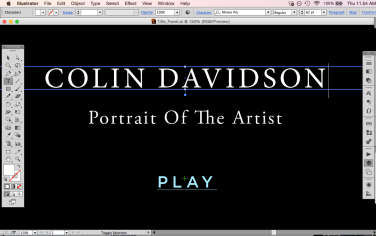 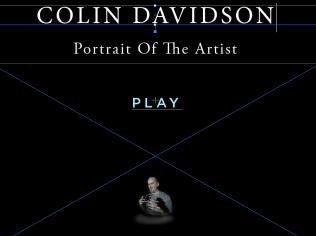 For our piece I tried a few experiments, and decided to go with Minion Pro for our titles and Adobe Garamond Pro for the subtitles. I wanted to create the same classic, elegant look which Colin uses to introduce his work. The PLAY button is Gotham HTF, chosen because of the serif texts Colin uses, but also because it is a button so I wanted to create a difference between non interactive and interactive text.

We also began to think about the explorable environment and how we could design this in a way that was engaging and complimentary to the interview. From our research into documentary filmmaking, we know that there is a range of archival footage that supports the stories. We thought that it may be interesting to have our explorable environment with a range of pieces and moments that Colin refers to in our interview.

While we were thinking about this, Nicole was testing how the Oculus integrates with Unity and how scaling would work. As a test, she brought a range of the paintings into the scene to look around. While we were looking at this, we began to see how effective a simple set up was in this context. It was incredibly effective when you put the headset on – the work really spoke for itself.

While we were all testing visuals, we bounced our ideas about with each test to inform each other’s work. I began to try a few simple Maya tests, using light to guide the user around the environment. 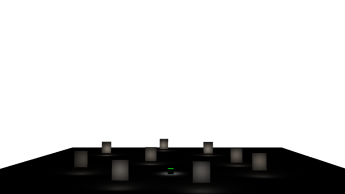 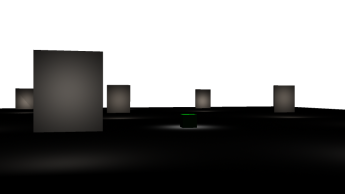 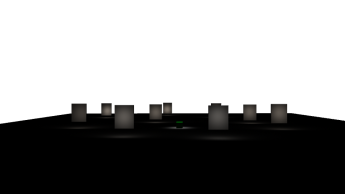 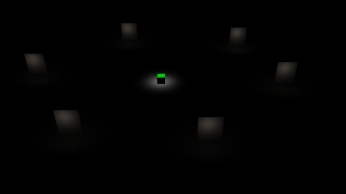 I started to adjust the scene to form a set up that I thought would work well in the space. It was hard to tell with so little detail so I then added some images to give a better sense of what it would feel like. I added a still from a DepthKit interview to see how it could look in the space. 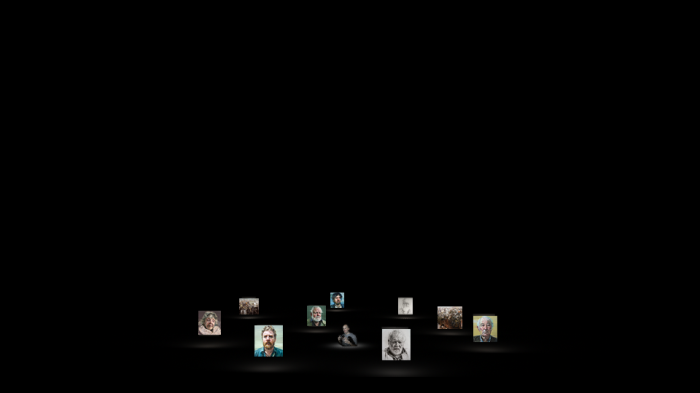 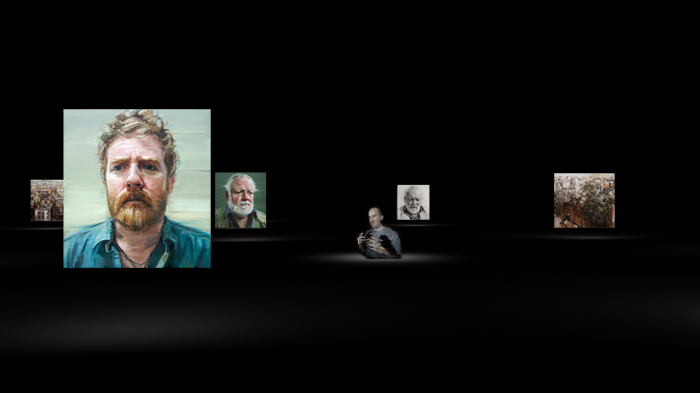 The scene started to take shape a little more here, but the light wasn’t quite right. I then adjusted how the light appeared on the paintings, creating more depth in the space. We thought that a floating torso was a bit strange, so I took a photo of one of Fiona’s sketches of a man sitting down and added some painty details and shading to it to make it fit in the space. 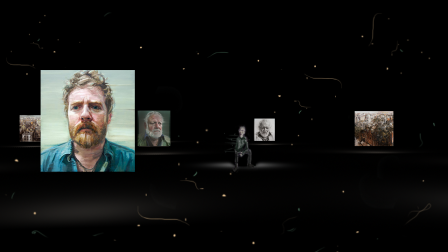 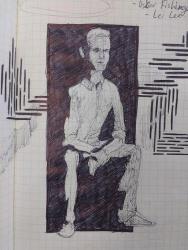 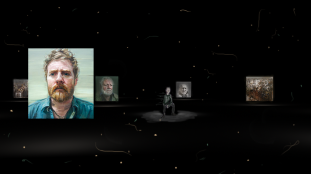 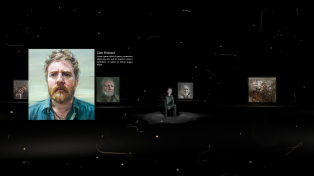 Finally I added some text to the piece to better illustrate the participant experience; as a participant approaches a piece, they can read or further details on it.

Bringing it all together 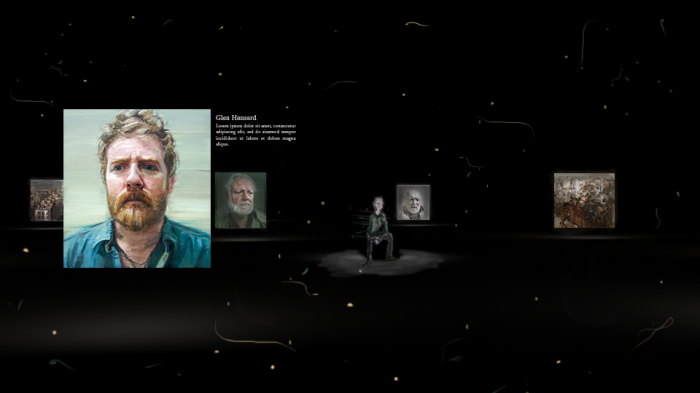 This is all shared on our presentation which can be found here.

2 thoughts on “Iteration on Concepts”